Whack A Gnome is a free whacking game for Windows 8 and 8.1. In the game, you have to hammer-whack the cute little gnomes invading your garden. To do so, simply click on the gnomes who are popping their heads from the ground in your garden, and a hammer will appear which will whack them on their head – OUCH! The score which directly gives the number of gnomes whom you have whacked will appear at the top left corner of the screen. The game has cute graphics and makes for an excellent download.

Whack A Gnome is available for free from the Windows App Store.

Main features of Whack A Gnome for Windows 8 and 8.1…

When you install and run Whack A Gnome on your Windows 8 or 8.1 device, you will be presented with the below screen on your device. This is the main interface of the game. Simply click or tap anywhere on this screen, and you will be presented with the Play button which you can click on to start the game itself. When you do so, you will be taken to a screen where initially, the first round will start. The game is divided into multiple rounds, and with each round the difficulty level of the game goes on increasing. The gameplay interface of the game is shown in the screenshot below. 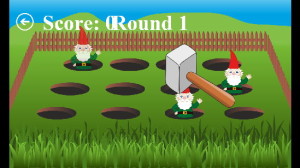 You can see the round number and the score at the top of the screen, and can also see the back arrow which enables you to return to the previous screen. You can see me in the process of hammering a gnome in the screenshot above. Overall the game is pretty interesting and makes for a great download on all devices!

Whack A Gnome is a great game which makes for an excellent download on devices running Windows 8 or above. You can grab it from the link below.

Get Whack A Gnome.